American Monument by lauren wood was set to open this past Sunday at the University Art Museum at California State University, Long Beach. It was pulled just prior to opening by the artist. If the museum did not already know, it received an urgent reminder of the role of a contemporary art museum.  It is an active and engaged role and not for the faint of heart.

The scheduled opening ceremony was uproarious – and not in a fun way. Kimberly Meyer, the museum’s director, had been fired six days earlier. Woods was an exhibitor by invitation of Meyer and woods considered Meyer a primary collaborator in producing American Monument. Dean of the art school, Cyrus Parker-Jeannette, was sharply questioned by the attendees when she tried to give her opening remarks.

Following introductory remarks, woods opened by describing her initial enthusiasm for the project. “I saw the potential for a unique collaboration in creating the monument in proximity to young people who are actively discovering and staking out their place in the world, young people who are trying to understand what power and authority is.” She then played the record containing audio from the cell phone video taken by Diamond Reynolds as her boyfriend Philando Castile sat bleeding to death next to her on July 6, 2016, after being shot by Minnesota police officer Jeronimo Yanez. Several attendees wept as Reynolds’s words echoed through the stark space.

Woods then concluded, “Monument can only resume its co-creative process when restored, which can only happen with Kimberli Meyer retained as director of UAM. .. And so with great disappointment and profound sadness, I hereby declare the process to continue building American Monument paused.”  With that, she shut down the monument.

Meyer was fired without comment or explanation. That was ill-advised and the administration will find that they will have to back-pedal furiously from that stone-faced position.

Art historical exhibits in museums are rightly perceived as placid galleries – mostly – where we can examine portraits and snapshots of who we are and how we became that way. A contemporary art gallery is a potential powder keg.  The gallery is holding up a mirror.  Often enough, we will want to shoot the messenger. This role of simultaneous interpreter is not a matter of choice – it comes with the territory.

Of course this will not stand. The University Art Museum will take a more active role in its involvement with American Monument. The administrators have no choice. As it stands, the only view we can have of the museum’s position is one of spineless pusillanimity. 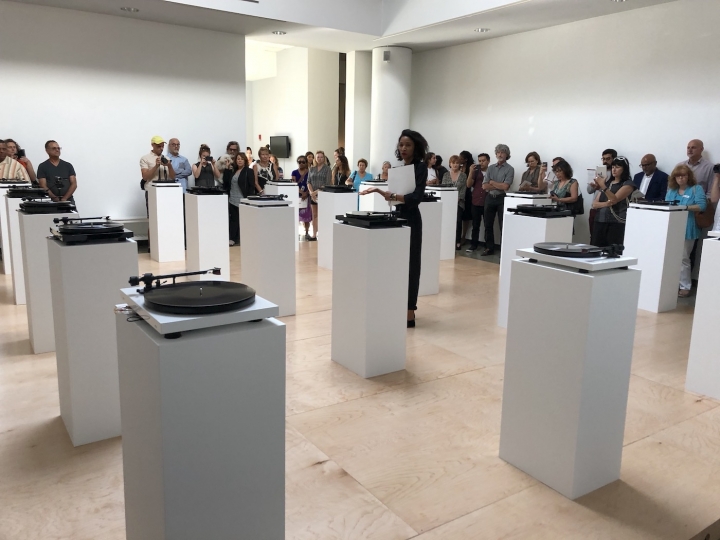